The Cascade to a Conservative Civil War 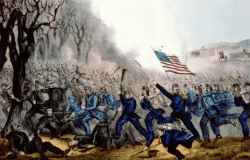 The tribalism mindset brewing within the United States is progressively becoming more ingrained into everyday life, and the American people appear to be sinking deeper into irreconcilable differences. Impeachment, socialism, and immigration reform are just a few hot button issues that not only have Republicans and Democrats waring but are also a source of contention within the modern conservative movement.

Speaking with former Delaware Senate minority leader, Charlie Copeland, he relayed his views on the political conversion that our country is going through and his projections about our societal future.

“I think that we are as a country going through a political realignment or a new look at what does it mean to be a conservative or a nationalist,” Copeland stated.

The ideological differences between nationalism versus globalism and capitalism versus socialism have only gained more traction as a sort of civil war mentality continues to brew between conservatives.

Prominent conservative commentator and author Michelle Malkin recently wrote a column criticizing popular millennial Charlie Kirk over his rhetoric about stapling green cards to the back of diplomas. Malkin’s work and research on immigration date back for decades, and her no-nonsense approach to the subject have garnered both great support and criticism.

Kirk’s organization Turning Point USA (TPUSA) has made a prominent placement on college campuses nationwide where they say their goal is to empower young people to promote the principles of free markets and limited government. Kirk has come under scrutiny from other young conservatives accusing him of stifling free speech and heavily distancing himself from traditional conservative values. This has caused TPUSA officers to quit in mass due to the group’s views on immigration and their “culture of censorship.”

Another conservative campus organization Young America’s Foundation (YAF), cut ties with Malkin. In part of the group’s statement, they reasoned that their decision was based on that there is no room in mainstream conservatism or at YAF for [H]olocaust deniers, white nationalists, street brawlers, or racists.”

This had Malkin firing back, calling them “The Keepers of the Gate” for censoring her and other conservatives that disagreed with them.

With all this rivalry, where does this leave the future of debate within our country?

Also acting as the president of Intercollegiate Studies Institute (ISI), Copeland has helped spearhead this organization onto 40% of America’s campuses, where they provide eager college students with the opportunity to delve deeper into conservative thought.

With his impressive political record and his extensive knowledge of historical bureaucratic shifts, Copeland relayed his insight into what makes the conservative movement so extraordinary.

“The debate itself is very healthy. Individual personalities play a part. The bottom line is, we actually have this debate where bright and brash conservative thinkers are making propositions and proposals, and they are arguing with one another about it.  As opposed to those on the left where those ideas are all buried, and you are not allowed to have a debate,” Copeland stated.

The conservative movement offers room for free thinking and the exchange of ideas while, in contrast, the left continues to rely on indoctrination techniques to progress their agendas.

“If all you do is sit around and talk about issues with people who you always agree with, you fail to sharpen your intellect. To engage in a debate with someone forces you to learn more about their position and, in turn, understand more thoroughly your own so that you can have a substantial argument,” Copeland continued. “Do not hide from liberal and socialist thought, go learn from it and recognize its flaws so that you can do a better job of promoting conservative thought and maybe even improve on conservative thought.”

ISI helps to provide that intellectual content about free markets, limited government, the dignity of the individual, and all the foundational principles about what makes a society free and prosperous. ISI is looking for the bright, free-thinking student that wants to understand through history. They spend lots of time with bright students who are going to graduate and become leaders in their communities, state, and even in our nation. There have been two U.S. Supreme Court Justices so far who had come through ISI programs when they were in college.

It is evident at this point that we cannot rely on political parties or our school systems to fulfill this vitally important function.

As conservatives, we cannot rely on the Republican Party to do anything other than what political parties do, which is to try and coordinate a 50%+1 majority. While the Republican Party indeed tends to lean on the more conservative side of philosophy, it does not negate the fact that the party is a political organization intent on trying to gain enough power to build a working majority.

Copeland served in the Delaware State Senate for six years, made his way up to minority leader, and has seen first-hand how those political winds blow.

“It is up to us who are conservatives to try and get the society and the culture to recognize the value of conservatism versus the value of socialism and controlled thought,” Copeland relayed.

While contention continues to brew within the American peoples’ viewpoints, one thing is clear, the conservative movement is still alive and well as long as the debates continue. When the vocalization of important conservative issues stops, that’s when we certainly have a very prominent problem.

The Cascade to a Conservative Civil War is original content from Conservative Daily News – Where Americans go for news, current events and commentary they can trust – Conservative News Website for U.S. News, Political Cartoons and more.

Friend of Liz Cheney Spills the Beans, Claims the Lawmaker Orchestrated High-Profile Attack on Trump in His Final Days